Update in Pictures of the Garden 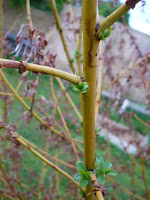 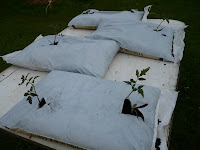 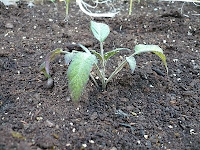 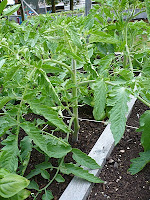 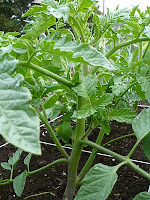 I was out and about early this morning in the garden. It's pretty cool out there at a brisk 6 C (or, 42.8 F). Brr. I needed to pick some of the greens to bring to a friend I am visiting today. She'll be gifting me with some things and I thought it would be nice to bring fresh produce from my garden to her in return. So in a bag waiting to be taken to her house is; spinach, lettuce and swiss chard.

I wanted to get some pictures of some of the plants and document how they are doing. Primarily the tomatoes. I was given via Freecycle some tomato seedlings someone had which were extras for him. They were two types I am not growing so I thought.... what the hay? Boy are they small. I will post pictures of my own tomatoes and some of the newbies. The size difference is amazing as you will see. I planted some in the SFG boxes and some right in the bags of earth from the store. There was no more room at the inn, so to speak. I was going to do the "African bag" garden but, didn't have enough stones to do it, opted to cheat on them and see if they will vine over the sides of the table and grow that way?

I also wanted to post some pictures of the arctic willow. It was a gift for me from my DH for my birthday. We had been (notice the past tense in this sentence?) really worried about her. She came to us with a decimated root ball. We did all we could when she was planted out to give her a good start but, she went through some terrible transplant shock and we thought we were going to loose her. In the picture the burnt looking bedraggled leaves are the ones that died with the shock. Though a couple of days ago I went out on my early morning rounds in the garden and lo and behold she was growing new leaves. That's what the picture is of......the newly budding leaves.... the arctic willow is fighting and coming back. Woo hoo!

The picture with the stake in the middle is the horseshoe pit I took over. I decided since no one in this family pitches shoes there had to be a good way to use the pit. There was and is. Those green things poking up through the straw are potato leaves. I planted some potatoes from PEI (Prince Edward Island - renowned for their potatoes) in there. And, they are looking mighty fine already. It time to top them with more hay.

How does your garden grow? I hope it is doing as well as can be expected.
Posted by Phiddy at 5:56 AM

Cita, so glad to see Willow sprouting-what a relief. Trees that die are sad sad sad.

My weeping copper beech appeared to be waiting for a divine intervention and one day-She sprouted!! From nearly every twig end at once! Gorgeous and so loved. Spring has been good to us here.

Strawberries are going great guns. Blueberries are delicious if I can wrestle one or two from Piper the berry hound. Cherry trees are getting fourth sets of leaves.

The Gala trees have apples about an inch in diameter; this spring Ormond thinned them for the first time. We'll see how they do, perhaps bigger and sweeter individual apples than when there were so many to ripen. I can't wait!!

I saw peaches on a blog yesterday--are they in the stores already!! Remember what used to pass for peaches in Key West? Nasty, tasteless, mealy little hard nuggets with labels that said Peach. I was never sure!