Tomatoes and their companion plant, basil 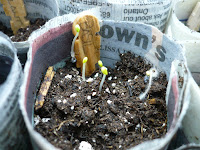 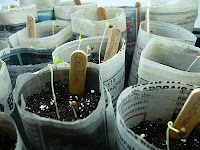 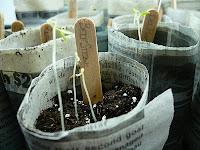 You can see the labels on the small sprouted plants. Beefsteak and Del Pino tomatoes are the first two and the really small ones are basil.

I am off and running today. Got yogurt on the stove to watch. Last week I burned the milk and talk about hard to get clean! I won't do that again. LOL!
Posted by Phiddy at 10:49 AM 1 comment:

Winter’s done,
and April’s in the skies.
Earth, look up with laughter
in your eyes!

Posted by Phiddy at 8:11 AM No comments: 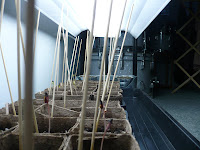 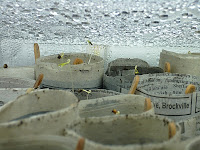 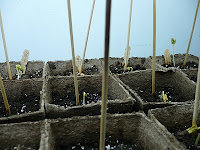 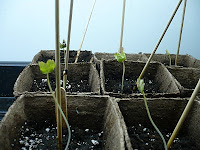 Surprise, surprise, surprise. I wrongly in another post said I had started marigolds. I didn't. They were actually morning glories and that is what most of these beautiful little seedlings are.

The varieties are; blue (the most commonly seen morning glories), saucers whose blooms are huge like... saucers and the double sunrise which are the colors of sunrise and double bloomed.

In the first place where I lived here in Canada there was no room for a garden but, I could get some window boxes perched precariously on the little porch by the front door. What I grew were mostly flowers. But the major ones were morning glories. I have a soft spot in my heart for them still. That's why I will probably grow them from now on.

The small seedlings you can see under the wet dome... those are some kind of veggie sprouting. I am not sure what yet as I didn't pull a tag to see. But, I will look to see what they are either today later or, tomorrow.
Posted by Phiddy at 7:03 AM No comments: 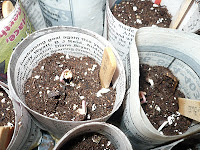 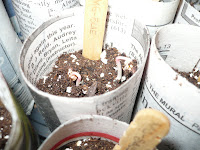 Not sure how clear these pictures are.
These are the first seedlings up in the first tray planted on the 26th!
They are marigolds.
Cute little things, aren't they?
Nothing else is up yet.

Yippee there is Spring in the air.
Of that I am sure, now.

Also got a third tray started (looks just like the others) with 46 small newspaper pots. I am using a sterile soilless mix I purchased at a local garden center. Forgot to mention that. And, they are sitting on a heat mat without grow lights on, yet.

Today I planted in a third box, yellow onions, basil and eggplant. Boy those basil and yellow onion seeds are really tiny. Had to put on my glasses to see them. Buried all the seeds only 1/4 inch in the soilless mix. Me being me, they are all labeled and charted on my garden plan. Who would have thought I would have gotten this obsessive about gardening? LOL

Posted by Phiddy at 1:27 PM No comments: 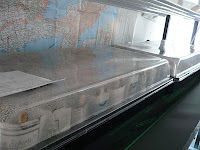 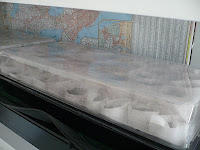 The Start of Something Big.

Here they are some 100 (give or, take one or, two) seed pots with either veggie seeds or, flower seeds all planted and ready to sprout. (Have fingers crossed here.) See the nice moist humid environment? They're loving it!
I am so excited. It feels that much closer to having a real garden which also means it's the end of winter! Woo hoo!
Posted by Phiddy at 5:33 PM No comments: 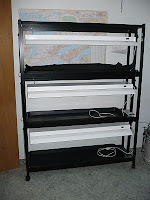 Isn't it just beautiful? If you can't tell by the lousy
picture it's what is called a "light garden".
It arrived yesterday morning via FedEx in many boxes.
It took two adults about 1 hour to set it up.
Without too much muss or, fuss.
Today will be the day to start peppers and tomatoes
to place under the grow lights.
Oh happy day!
Posted by Phiddy at 9:40 AM No comments:

Today according to the Old Farmers Almanac is the day to start above ground vegetables. So... I am planning on starting the peppers and tomatoes today.

Then as I was sitting here gathering my thoughts, the doorbell rang. It was FedEx with a huge couple of packages for me. It was the indoor shelving unit with grow light fixtures and bulbs. Oh happy day! Right on time. Now all I got to do is put the unit together. Then plant the babies and get them on the heat accelerator mat.... and soon will have seedlings springing to life. I can hardly wait for Spring to arrive here in zone 4 - 5 (depends where you look to see what zone I am in) and figure the last date for frost.

Off to put the shelves together and then get the seeds in their pots.
Pictures to follow.

Posted by Phiddy at 9:33 AM No comments: 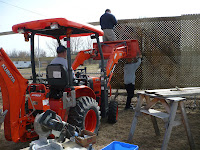 This was done for privacy for our yard. We have no trees or, I should say too few trees. We will soon add another fruit tree to our small orchard making the # 10.

The weather had warmed up and the guys got on the stick this past week. It was finished very quickly.... three days total. And, will look very beautiful once the silver lace vines start growing all along the bottom edge of the lattice. Thus making the lattice create more privacy. Nude sunbathing anyone? Only kidding.... really! 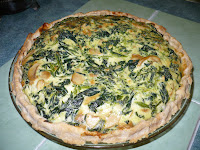 Since I started buying those beautiful free range organic eggs from Angie at Heritage Harvest Farm, I have been having a bit of a time trying to use a dozen up each and every week. Cause that's the deal I made..... I buy a dozen eggs each week from her.

You see there's only the two of us home now and I had to find some ingenuous ways to use those eggs up. Here's what I did and you had better believe I will be repeating this in the very near future!

I premixed and froze raw a spinach/mushroom quiche. Packed it up in a freezer baggie and placed in the freezer for use on a later date. This picture shows the result of the experiment. It came out as delicious as it looks. All I had to do was make the pie shell and blind bake the pie shell and then pour the defrosted quiche mix into the shell and bake. Oh wow.... was it ever good. What a time saver too. And, it's especially good for those busy nights when I really don't have the time to cook.

Maybe I'll be making some pie shells and freezing those so this dish then becomes even easier to thaw and use.
Posted by Phiddy at 10:40 AM No comments: 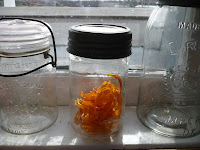 I was thinking while eating an orange.... why not dehydrate the zest for later use. Ah ha, frugality at it's best. Here is the result. It looks so pretty in the old canning jar with the sun shining through it. I won't leave it on the window sill of course as the sun will cause it to deteriorate. I just did this for the picture and so you could see the other older canning jars next to it I have collected.
Posted by Phiddy at 10:28 AM No comments: 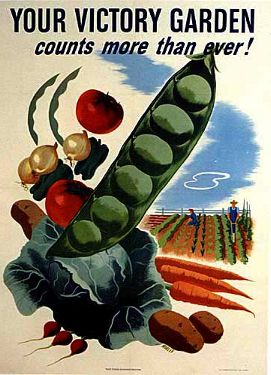 World War II Garden Poster
Posted by Phiddy at 8:32 AM No comments:

A Poster for our Times 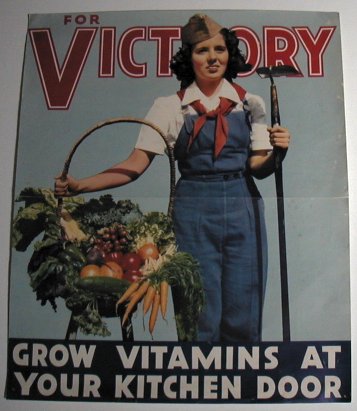 Posted by Phiddy at 8:30 AM No comments: 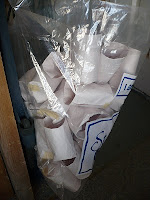 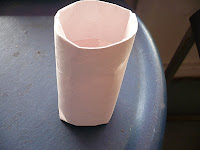 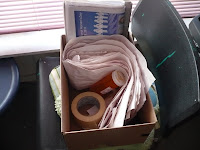 Seedling Pots
Posted by Phiddy at 11:52 AM No comments:

Yesterday every moment I had to spare I made seedling pots. It's almost
"moon time" for planting and if, I don't get a move on I'm going to be late starting my seeds.

You probably know if you are going to start seeds indoors most plants require to be started at least 6 - 8 weeks ahead of your last frost date. For me here that's somewhere in late (to early) May. Depends on who you listen to or, what you read.

Anyway the pots were simple enough. I googled instructions off the net. I looked at any number of sites to see how it was done. Then devised my own way. I am using blank packing paper from shipping boxes, newspapers and lord knows what else I may use for these. A very great idea for reusing and recycling.

I had a problem finding a cylinder which was completely round and small enough. I tried a glass but, that ended up broken. Then I had that mess to clean up. Finally hit upon the idea of an old pill bottle. Works great and I can now fashion at least one seed pot in less than a minute. Sometimes two! Woo hoo! Another couple of days and I'll be worrying about germination time and waiting to see green little shoots appearing. Doing this makes me finally realize that yes, Spring is just around the corner.

Posted by Phiddy at 7:07 AM No comments: