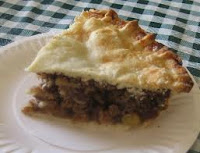 Spread sliced tomatoes in a non-metal container; sprinkle with salt. Let stand overnight. Rinse, drain and rinse quickly again. If desired, soak the raisins in 1/4 cup of boiling hot cider vinegar for 15 minutes to plump. Chop the tomatoes into small bits. (Use a food processor, it is easier and quicker). In a large non-aluminum kettle, place all of the ingredients, including tomatoes. Cover the pan and let simmer for 40 minutes. Uncover the pan. Allow the mincemeat to boil gently for 1 hour 15 minutes. During this time, stir the ingredients occasionally. Do not burn or the recipe will be ruined.

Dump into a pie shell, cover with second crust and bake at 350 for 40 minutes or, until the pie shell is nicely browned.

I have to do something with all the green tomatoes in my garden as we are well into October now. I can't stand seeing them go to waste. This is one way I will use them up. Another way... tomato relish oh and who could forget the fried green tomatoes!

Email ThisBlogThis!Share to TwitterShare to FacebookShare to Pinterest
Labels: vinegar