When and where to watch
The Eta Aquarid meteor shower is predicted to peak early on Sunday morning, but dark skies and clear weather are vital to observe them. Under ideal conditions (a dark, moonless sky) about 55 to 60 of these very swift meteors might be seen per hour.
The meteor shower appears at about one-quarter of its peak strength for several days before and after May 5. This is a very good year to look out for the Eta Aquarid meteors from Halley's Comet because the moon will be at a thin, waning crescent phase, and just 20-percent illuminated and providing little interference for viewing these swift streaks of light.
From places south of the equator, the Eta Aquarids typically put on very good show. Australian stargazers consider them to be the best meteor display of the year.
But for those watching from north of the equator, it's a much different story.

Where to look
The apparent origin point of a meteor shower in the night sky is known as its radiant. For the Eta Aquarids, the radiant is found within the "Water Jar" of the constellation Aquarius, which begins to rise above the eastern horizon around 3 a.m. your local time. Unfortunately, this constellation never really gets very high as seen from north temperate latitudes. And soon after 4 a.m. local time, the morning twilight will begin to brighten the sky.
So if you are hoping to see up to 60 meteors per hour, forget it. With the radiant so low above the horizon, the majority of those meteors will be streaking below the horizon and out of sight.
In fact, from North America, typical Aquarid rates are only 10 meteors per hour at 26 degrees north latitude (Miami, Fla., or Brownsville, Texas), 5 per hour at around 35 degrees latitude (Los Angeles, Calif., or Cape Hatteras, N.C.) and practically zero to the north of 40 degrees (New York, Chicago, and Philadelphia).
"So," you may be thinking, "What's the point of getting up before dawn to watch?" The answer: Despite the long odds, you still just might see something spectacular.


Catch an Earthgrazer, or comet crumb
For most, perhaps the best hope is perhaps catching a glimpse of a meteor emerging from the radiant that will skim the atmosphere horizontally — much like a bug skimming the side window of an automobile.
Meteor watchers call such shooting stars "earthgrazers" and they are known for spectacularly long, colorful long-lasting trails.
"These meteors are extremely long," Robert Lunsford of the International Meteor Organization explained. "They tend to hug the horizon rather than shooting overhead where most cameras are aimed."
"Earthgrazers are rarely numerous," NASA meteor expert Bill Cooke, a member of the Space Environments team at the Marshall Space Flight Center has said. "But even if you only see a few, you're likely to remember them."
If you do catch sight of one early these next few mornings, remember that you are likely seeing the incandescent streak produced by material which originated from the core of Halley's Comet.
So it is that the shooting stars that we have come to call the Eta Aquarids are really an encounter with the traces of a famous visitor from the depths of space and from the dawn of creation. 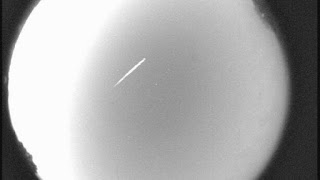 An Eta Aquarid meteor streaks through the night sky.

Fascinating information, Cita, thanks as always for your research and presentation.