Canning and Pickling Tips and Tricks 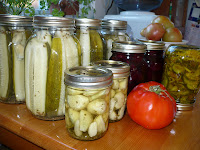 Canning and pickling are great ways to preserve the bounty of the season’s harvest and keep many vegetables and fruit.

• Scrub food well. Be sure to remove and discard a 1-1/16-inch slice from the blossom end of fresh cucumbers.

• Use canning or pickling salt (not iodized table salt, sea salt, kosher or any of the others I am not remembering to name!). However, non-caking materials added to table salts may make the brine cloudy. Flake salt varies in density and is not recommended for use.

• For the best results, use white distilled or cider vinegars with 5 percent acidity.

Pickling is preserving foods in vinegar (or other acid). Vinegar is produced from starches or sugars fermented first to alcohol and then the alcohol is oxidized by certain bacteria to acetic acid. Wines, beers and ciders are all routinely transformed into vinegars.

Pickling may have originated when food was placed in wine or beer to preserve it, since both have a low pH. Perhaps the wine or beer went sour and the taste of the food in it was appealing. Containers had to be made of stoneware or glass, since the vinegar would dissolve the metal from pots. Never ones to waste anything our ancestors found uses for everything. The left over pickling brine found many uses. The Romans made a concentrated fish pickle sauce called “garum”. It was powerful stuff packing a lot of fish taste in a few drops.

There was a spectacular increase in food preservation in the sixteenth century owing to the arrival in Europe of new foods. Ketchup was an oriental fish brine that traveled the spice route to Europe and eventually to America where someone finally added sugar to it. Spices were added to these pickling sauces to make clever recipes. Soon chutneys, relishes, piccalillis, mustards, and ketchups were commonplace. Worcester sauce was an accident from a forgotten barrel of special relish. It aged for many years in the basement of the Lea and Perrins Chemist shop.

• For crisper pickles, put the vegetables (whole or sliced) into a wide bowl and spread a layer of pickling salt on top. Cover and let sit overnight in a cool place. Discard the liquid, then rinse and dry the vegetables before pickling or canning as usual. Or, use Pickle Crisp made by the Ball company or, do it like our grandmother's did.... add a grape leaf to the jar.

In conclusion...
Some historians believe that food preservation was not only for sustenance, but also cultural. They point to numerous special occasion preserved foods that have religious or celebratory meanings. In America more and more people live in cities and procure foods commercially. They have been removed from a rural self-sufficient way of life. Yet, for many, a garden is still a welcome site. And, annually there exists a bounty crop of vegetables and fruits. It is this cultural nature of preserved foods that survives today. Interests have shifted from preserve “because we have to”, to “preserve because we like to.” I am one of those who like to.
Posted by Phiddy at 7:15 AM

I know I shouldn't but when I am finished with a jar of pickles, I drop a few boiled eggs in the brine and let them sit for a week.... they are delicious....and I haven't died yet... :)

Those are really good. Beet juice is another good one.